Grenadier Island's first official settlement was by John Mitchel in the early 19th century, followed by the Bedford family. At least 14 families had settled upon the island prior to the official grant of a land patent in 1824, and these prior inhabitants were reluctant to give up their holdings as the island's land began to be sold by the new owners. Early industry on the island consisted primarily of fishing, in addition to lumbering and farming.

It was visited by General James Wilkinson and his troops after retreating from the St. Lawrence River in 1812, when he landed his fleet in Basin Harbor.

The island was at one time alternately known as Isle aux Chevreuils. 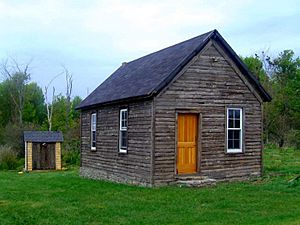 The Grenadier Island Schoolhouse is located in the middle of the island. It has a single room with an outhouse situated behind it. In the early 20th century it had around 13 students. It was added to the National Register of Historic Places in 2012. 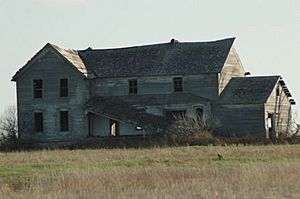 The Humphrey farm house, also known as the "Carbide House", was a two story home with a basement and an attic. The house has been abandoned for many decades, and has been gradually falling in upon itself for many years (as of 2014).

All content from Kiddle encyclopedia articles (including the article images and facts) can be freely used under Attribution-ShareAlike license, unless stated otherwise. Cite this article:
Grenadier Island, New York Facts for Kids. Kiddle Encyclopedia.