Griffon is a steel Dive Coaster roller coaster located at the Busch Gardens Williamsburg amusement park in James City County, Virginia, United States. Designed by Bolliger & Mabillard, it is 205 feet (62 m) high, and is the second-fastest (71 miles per hour (114 km/h)) Dive Coaster built. The roller coaster features two Immelmann loops, a splashdown, two vertical drops and was the first of its kind to use floorless trains. Griffon was announced to the public on August 23, 2006, and opened on May 18, 2007, to positive reviews by both newspapers and enthusiasts. In 2007, Amusement Today's annual Golden Ticket Awards voted it the third-best new steel roller coaster of that year and the 27th-best steel roller coaster. It was voted the 33rd-best steel roller coaster in 2013.

On June 30, 2006, Busch Gardens Wiliamsburg announced that LeMans Raceway would be closing to the public on July 5, 2006 in order to make room for the next year's new attraction. Construction for Griffon began the next day with the demolishing of the raceway. A trademark for the name "Griffon" was filed by SeaWorld Parks & Entertainment on July 12, 2006. The roller coaster was announced to the public on August 23, 2006. On December 11, 2006, two cranes installed the highest piece of Griffon with an evergreen tree. The vertical drop and Immelmann loop were completed in January 2007 and the final piece of track was installed in late February. After testing was complete, the roller coaster opened on May 18, 2007; one week earlier than its original scheduled opening date.

When Griffon opened it 2007, it held the records for the tallest, and fastest Dive Coaster in the world; both which were previously held by SheiKra at Busch Gardens Tampa Bay. Griffon was also the first Dive Coaster to feature floorless trains. When Happy Valley Shanghai opened Diving Coaster in 2009, it took the drop length record at 213.3 feet (65.0 m). 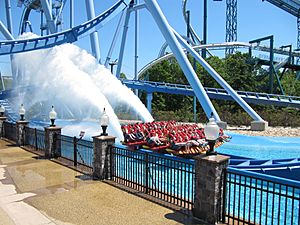 One of Griffon's trains passing through the splashdown element

After the floors drop and the front gate opens, the train is dispatched from the station and makes a downward right turn immediately followed by an upward right turn which leads directly to the 47-degree inclined chain lift hill. Once the train reaches the top of the 205-foot (62 m) lift, it makes a right turn into a holding brake where the train slowly moves over the first drop, stops for five seconds, and then is released down the 90 degree drop. By the time the train makes it to the bottom of the drop, it reaches its maximum speed of 71 miles per hour (114 km/h). Then, the train enters a 146-foot (44 m) Immelmann loop before dropping back to the ground and making a banked upward left turn into the mid course brake run. After the train slows down, it enters a second 130-foot (40 m) near 90 degree drop into another Immelmann loop. Following a small airtime hill, the train goes through a splashdown which sprays two 50-foot (15 m) lines of water in the air. Finally, the train makes a banked turn to the left leading into the final brake run. One cycle of the ride lasts three minutes.

The steel track of Griffon is 3,108 feet (947 m) long and the lift is approximately 205 feet (62 m) high. The ride is equipped with an elevator that can return riders to ground level if a train must be evacuated while on the lift hill. The supports are light blue while the track is a darker blue. The track was fabricated by Clermont Steel Fabricators in Batavia, Ohio, which manufactures Bolliger & Mabillard's roller coasters.

Griffon operates with three steel and fiberglass trains, colored red, yellow, and black. Each train has three rows that seat ten riders across for a total of 30 riders per train; each seat has its own individual over-the-shoulder restraint with a seatbelt. This configuration allows the ride to achieve a theoretical hourly capacity of 1,400 riders per hour. Unlike traditional roller coasters, Griffon's trains are floorless, allowing the riders' legs to dangle throughout the ride. Riders also experience up to 4 times the force of gravity.

All content from Kiddle encyclopedia articles (including the article images and facts) can be freely used under Attribution-ShareAlike license, unless stated otherwise. Cite this article:
Griffon (roller coaster) Facts for Kids. Kiddle Encyclopedia.