Hakea oleifolia, commonly known as dungyn, or the olive-leaved hakea, is a shrub or tree of the family Proteacea and is endemic to an area along the south coast in the South West and Great Southern regions of Western Australia. 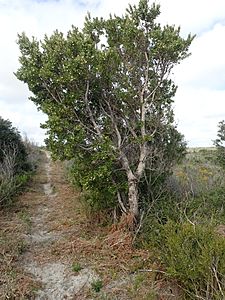 Hakea oleifolia was first formally described by Carl Meisner in 1856 and the description published in Transactions of the Linnean Society. Named from the genus Olea- olive and from the Latin folium - a leaf, referring to the resemblance of the leaf to that of the olive tree.

Hakea oleifolia is classified as "not threatened" by the Western Australian Government.

All content from Kiddle encyclopedia articles (including the article images and facts) can be freely used under Attribution-ShareAlike license, unless stated otherwise. Cite this article:
Hakea oleifolia Facts for Kids. Kiddle Encyclopedia.