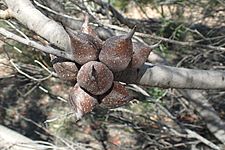 Hakea orthorrhyncha, commonly known as bird beak hakea, is a shrub which is endemic to the Murchison River area of Western Australia.

Hakea orthorrhyncha has a spreading habit, growing to between 1–3 m (3–10 ft) tall with a similar spread. The bright red flowers appear in axillary clusters in the leaf nodes on older growth along the branches from early winter to early spring. Leaves vary, they may be needle-like or flat and sometimes forked, curved or straight ending in a sharp point between 7–18 cm (3–7 in) long. Smooth woody fruit are either egg-shaped or elliptic 4–5 cm (2–2 in) long and 2 cm (0.8 in) wide.

The species was first described in 1868 by botanist Ferdinand von Mueller who gave it the specific epithet orthorrhyncha which is derived from the Greek orthos "straight" and rhynchos "beak" alluding to the straight beak on the seed capsules. The common name, bird beak hakea, is presumed to be a confusion between the Greek words for straight and bird.

There are two varieties of the species, based on differing foliage characteristics:

All content from Kiddle encyclopedia articles (including the article images and facts) can be freely used under Attribution-ShareAlike license, unless stated otherwise. Cite this article:
Hakea orthorrhyncha Facts for Kids. Kiddle Encyclopedia.