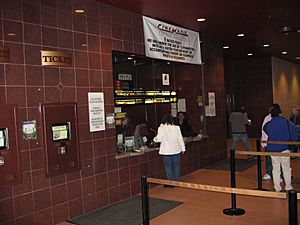 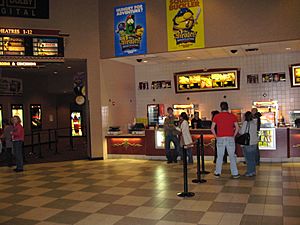 The concession stand next at the Cinemark movie theater in the Hampshire Mall. To the left is the walkway that leads to the theaters. 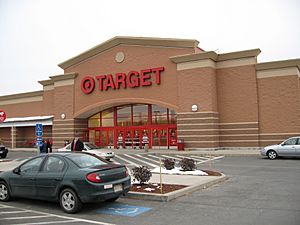 Hampshire Mall is a primarily one-story shopping mall with a small second floor in Hadley, Massachusetts, United States, with approximately 55 stores owned by The Pyramid Companies. Current anchor stores include Dick's Sporting Goods, JCPenney, PetSmart and Target. The mall is home to Interskate 91 North, a roller skating rink on the second floor. Attached to the skating rink is LaserBlast: Ancient Adventure (a Lasertag facility that was formerly home to LaserStorm).

When the mall opened in 1978 it was anchored by JCPenney, Steiger's and Kmart.

The Steiger's store was demolished in 1994 for Media Play. The Media Play store opened August 10, 1995. Kmart closed in 2002 because of the chain's bankruptcy. In 2003 the former Kmart space was rebuilt and extended to house a Target store. Originally the mall contained a six screen movie theater that existed from 1978 to 1999. This was then expanded to a 12-screen Cinemark movie theater in 2000.

A 45,000 sq ft (4,200 m2) Dick's Sporting Goods store opened in early 2005, replacing a former Eastern Mountain Sports. Best Buy and Steve & Barry's replaced Media Play in early 2005. Steve & Barry's filed for Chapter 11 bankruptcy in 2008 and subsequently closed their Hampshire Mall store in August 2008 and it was replaced by the racetrack.

Walmart developers beginning in 2005 wished to build a new 212,000-square-foot (19,700 m2) Supercenter southeast of Hampshire Mall. However, there have been various hindrances as a consequence of a bylaw designed to keep out large stores by restricting new stores to 75,000 square feet (7,000 m2). After two years of negotiations, on November 20, 2007, a subdivision plan that exempted the planned Walmart Supercenter from the current bylaw restrictions was approved. Developers have eight years to get a site plan approved before the exemption expires. This would almost certainly mean the current store, attached to the east end of Mountain Farms Mall, would close.

In February 2009 Buffalo Wild Wings opened a store between Target and Best Buy. The restaurant got into a dispute with the mall because of an alleged faulty roof that led to a buildup of condensation on the premises. The Pyramid Corporation did not agree to carry out repairs and as a consequence some amount of the rent was withheld. Whether the restaurant never paid any rent or did pay some rent is disputed. The case is currently in litigation. On July 29, 2010, they announced that they lost their lease as of August 1, 2010. The space is now an Action Figure Planet gift shop.

Platterpus Records closed down its store in March 2010. In June 2010 the store reopened in Easthampton, Massachusetts.

The state of Massachusetts is considering widening Route 9 to two lanes in each direction from Middle Street to the mall area to alleviate frequent traffic jams. This would add to a previous project completed in 2008 that widened Route 9 from the Calvin Coolidge Bridge in Northampton and result in two lanes in each direction from Northampton through Hadley to the Amherst line. This would also enable easier access to Mountain Farms mall and the new Hadley Corner shops.

All content from Kiddle encyclopedia articles (including the article images and facts) can be freely used under Attribution-ShareAlike license, unless stated otherwise. Cite this article:
Hampshire Mall Facts for Kids. Kiddle Encyclopedia.