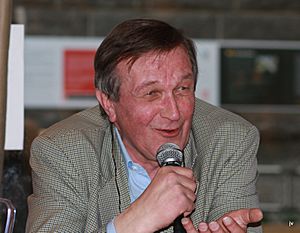 Hove was born in Bergen, Norway.

He served as a deputy representative to the Norwegian Parliament from Hordaland during the terms 1997–2001 and 2001–2005. From 1997 to 2000 he was a regular representative, covering for Lars Sponheim who was appointed to the first cabinet Bondevik.

Outside of politics, he graduated as cand.jur. from the University of Bergen in 1976. He worked at the university as an associate professor from 1976 to 1988 and lecturer from 1993 to 1997. He also worked as a lawyer.

Hove died in Oslo, Norway from a heart attack, aged 65.

All content from Kiddle encyclopedia articles (including the article images and facts) can be freely used under Attribution-ShareAlike license, unless stated otherwise. Cite this article:
Harald Hove Facts for Kids. Kiddle Encyclopedia.