Harewood is a northwestern suburb of Christchurch, New Zealand. The suburb is split by State Highway 1, with the bulk of Harewood's residential areas to the east of the highway and its industrial areas to the west.

State Highway 1 (SH1) passes through Harewood and separates the land use. Commercial use can be found to the west of SH1, whilst residential use is predominant east of SH1. 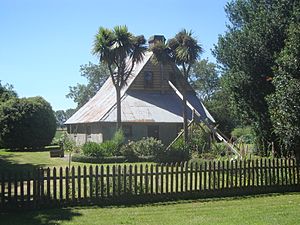 Tiptree Cottage is a historic cob cottage built in the 1860s.

In addition to State Highway 1 passing through the suburb, Harewood is a major transport hub for Christchurch and the South Island owing to Christchurch International Airport sitting within the suburb. The airport is the second-busiest in New Zealand after only Auckland Airport, bringing approximately 6.9 million passengers through Harewood in 2019. As a result of the airport, Harewood is also home to many freight and other industrial businesses which rely upon proximity to the airport, as well as rental car and campervan companies.

The suburb is also home to the International Antarctic Centre, a major Christchurch tourist attraction centred around the city's role as a departure point for many national Antarctic programmes. The centre was established in 1990, and is home to the administration offices of the New Zealand, United States, and Italian Antarctic programmes alongside multiple Antarctic-focused attractions. Hagglund armoured vehicles can occasionally be seen on roads around the Centre, offering rides to tourists.

Harewood statistical area, which does not include Christchurch Airport or the industrial area north of SH1, covers 3.78 km2 (1.46 sq mi). It had an estimated population of 1,400 as of June 2021, with a population density of 370 people per km2.

The proportion of people born overseas was 21.9%, compared with 27.1% nationally.

All content from Kiddle encyclopedia articles (including the article images and facts) can be freely used under Attribution-ShareAlike license, unless stated otherwise. Cite this article:
Harewood, New Zealand Facts for Kids. Kiddle Encyclopedia.