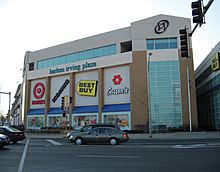 Harlem Irving Plaza (commonly referred to as "The HIP") is an enclosed mall located in Norridge, Illinois, a suburb of Chicago. The mall features over 100 stores and a food court; anchor stores include Carson's, Kohl's, Best Buy, and Target. It is one of the oldest shopping malls in the Chicago area.

Between 1975 and 1979, the former strip mall was enclosed, and a parking garage was added. Also in 1979, Madigan's was added to the roster of department stores.

In 1988, Kohl's acquired and converted all of the stores in the MainStreet chain; Carson Pirie Scott opened in the former Wieboldt's the same year. A food court was added in 1996, and Best Buy opened in the former Madigan's. Best Buy re-located to the mall's parking lot in 2001; its original location was replaced with a second parking garage.

In 2013, the mall underwent another expansion.

All content from Kiddle encyclopedia articles (including the article images and facts) can be freely used under Attribution-ShareAlike license, unless stated otherwise. Cite this article:
Harlem Irving Plaza Facts for Kids. Kiddle Encyclopedia.