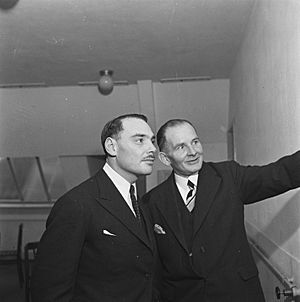 Harry Frederick Oppenheimer (28 October 1908 – 19 August 2000) was a famous South African businessman of Jewish descent. Oppenheimer was the chairman of Anglo American Corporation for a quarter of a century. He was also the chairman of De Beers Consolidated Mines for 27 years until he retired from those positions in 1982 and 1984. He was close friends with President of South Africa Nelson Mandela.

Oppenheimer was born in Kimberley, Northern Cape, South Africa. He studied at Charterhouse School and at Christ Church, Oxford University. Oppenheimer was raised in Johannesburg.

Oppenheimer was married to Bridget Oppenheimer until his death in 2000. They had two children. Bridget died in October 2013.

All content from Kiddle encyclopedia articles (including the article images and facts) can be freely used under Attribution-ShareAlike license, unless stated otherwise. Cite this article:
Harry Frederick Oppenheimer Facts for Kids. Kiddle Encyclopedia.