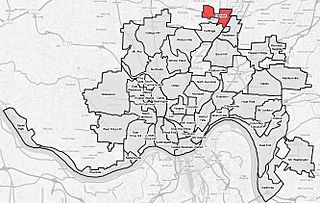 Hartwell is the northernmost neighborhood in Cincinnati, Ohio, centered roughly on the intersections of I-75 and Ronald Reagan Cross County Highway. Its boundaries are a combination of Caldwell Park and Ronald Reagan Cross County Highway to the south, I-75 to the east, and a combination of Millsdale Road and Compton Road to the North. The population was 4,640 at the 2010 census.

Hartwell was platted in 1868 by the Hamilton County Building Association. It was named for John W. Hartwell, who was vice president of the Cincinnati, Hamilton and Dayton Railway when the station was located.

Hartwell was incorporated as a village in 1876.

All content from Kiddle encyclopedia articles (including the article images and facts) can be freely used under Attribution-ShareAlike license, unless stated otherwise. Cite this article:
Hartwell, Cincinnati Facts for Kids. Kiddle Encyclopedia.