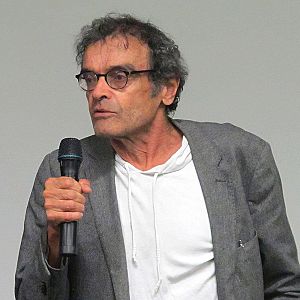 Farocki was born in Neutitschein, Sudetenland.

He has made over 90 movies, most of them were documentaries. Farocki studied at the Deutsche Film- und Fernsehakademie Berlin from 1966 to 1968. He was a teacher at the University of California, Berkeley from 1993 to 1999.

Farocki died in Berlin from an illness, aged 70.

All content from Kiddle encyclopedia articles (including the article images and facts) can be freely used under Attribution-ShareAlike license, unless stated otherwise. Cite this article:
Harun Farocki Facts for Kids. Kiddle Encyclopedia.