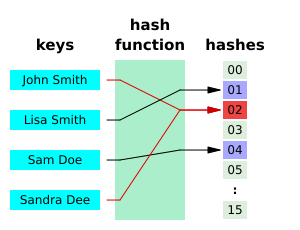 A hash function mapping names to the integers, 0..15. John Smith and Sandra Dee get the same value, which is called hash collision.

The Hash function is a function. When a computer program is written, very often, large amounts of data need to be stored. These are normally stored as hash tables. In order to find the data again, some value is calculated. This is like when someone reads a book, and to remember, they put what they read into their own words. Hash values are much the same, except that care is taken that different sets of data do not get the same hash value (this is called a hash collision).

A cryptographic hash function is a kind that is used in cryptography. Its hash value is a fixed-size, alphanumeric string, and may also be called a 'message digest', 'digital fingerprint', 'digest' or 'checksum'.

All content from Kiddle encyclopedia articles (including the article images and facts) can be freely used under Attribution-ShareAlike license, unless stated otherwise. Cite this article:
Hash function Facts for Kids. Kiddle Encyclopedia.