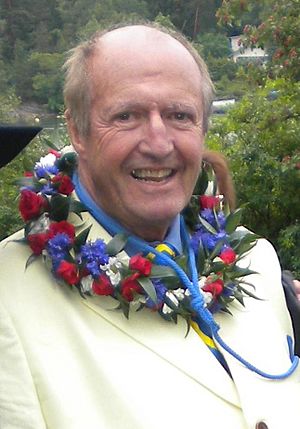 Hans Erik "Hasse" Wallman (1 May 1936 – 22 September 2014) was a Swedish businessman, impresario, composer, director, writer and producer. As an entertainment executive, he presented concerts for the British rock bands The Beatles and The Rolling Stones, as well as many other bands and performers. From 1965 until 1966, he was in charge of publicity at the record label Elektra Records. In 1991, he was given a Guldmasken award.

Wallman was born in Stockholm. He was married and had two children.

Wallman was injured in a horse riding accident at his home in Värmdö on 19 September 2014. He was put into a coma and died three days later, aged 78.

All content from Kiddle encyclopedia articles (including the article images and facts) can be freely used under Attribution-ShareAlike license, unless stated otherwise. Cite this article:
Hasse Wallman Facts for Kids. Kiddle Encyclopedia.