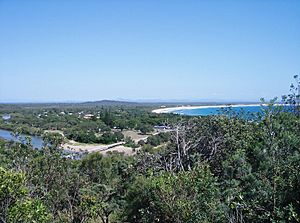 Hat Head is a coastal town on the eastern mid north Coast of New South Wales, 459 kilometres north of Sydney, Australia, and in the Hat Head National Park.At the 2011 census, Hat Head had a population of 326 people.

Straight Street is the Main Street and is below sea level however it has been many years since any flood activity invaded the village and then it was slight. A flood gate has effectively halted any freshwater flowing along Korogoro Creek from its source at the Swan Pool wetland to its mouth at Hat Head. As a result, the creek suffers increasingly from sedimentation and will benefit from periodic opening of the installed floodgates during small flood events.

It is part of the Kempsey Shire.

Hat Head is a semi isolated and totally unspoilt coastal location. It is predominantly a fishing village and tourist (fishing) resort. Approximately 350 permanent residents are living on a sand based land mass surrounded by National Park and water - little if any land remains for new building and property values compared to the balance of Kempsey Shire are 4 fold. It is a sought after and desirable location providing unique residential conditions.

Hat Head has good community facilities such as a library with internet access as part of the Nicholl Community centre, a tiny church), tennis courts, covered children's playground and disabled access to a beach viewing platform.

Due to lack of road access the area only started to be developed in the first part of the 20th century. Some early photographs show building and leisure activities - see: http://www.pictureaustralia.org/apps/pictureaustralia?action=PASearch&mode=subject&complete1=true&attribute1=subject&term1=Hat+Head+%28

All content from Kiddle encyclopedia articles (including the article images and facts) can be freely used under Attribution-ShareAlike license, unless stated otherwise. Cite this article:
Hat Head, New South Wales Facts for Kids. Kiddle Encyclopedia.