Kids Encyclopedia Facts
This page is about the castle near Turriff, Aberdeenshire. For the 16th-century castle at Newtyle, Angus, see Hatton Castle, Angus. 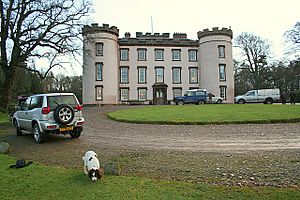 Hatton Castle is almost three miles (4.8 km) south-east of Turriff, Aberdeenshire in the north-east of Scotland. Formerly known as Balquholly Castle, sometimes spelt as Balquollie, it was renamed in 1814. The 17,994 square feet (1,671.7 m2) mansion was designated a category A listed building in 1972; the gardens are included in the Inventory of Gardens and Designed Landscapes in Scotland.

In the early 14th century Robert the Bruce granted the lands, then known as Loscraigie, to Patrick de Monte Alto. Mowat is the anglicisation of de Monte Alto. The Balquholly name was adopted some time before the 16th century. Records indicate there was a castle (spelt Balquholy) on the lands in the early 1500s, but it is likely it may have an earlier date. Purchased by Alexander Duff of Hatton in 1709 – although the contracts were not finalised until 1729 – ownership has remained with members of the family into the 21st century.

Construction of the present castellated mansion began in 1812 and was completed by 1814; it was at this time the name was changed to Hatton Castle. It has a round tower at each corner and incorporates sections of the ancient building. The stone-built mansion has three storeys plus a basement and an attic. A wine cellar and gun room are in the basement. The ground floor hall has a glass cupola set above a stone staircase that provides access to the first floor. There are two bedrooms on the first floor and seven on the second floor; the attic contains four additional bedrooms, a bathroom and storage space.

The mansion was designated a category A listed building by Historic Scotland on 28 November 1972. The gardens are included in the Inventory of Gardens and Designed Landscapes in Scotland and assessed under the historical and architectural sections as outstanding.

All content from Kiddle encyclopedia articles (including the article images and facts) can be freely used under Attribution-ShareAlike license, unless stated otherwise. Cite this article:
Hatton Castle, Aberdeenshire Facts for Kids. Kiddle Encyclopedia.