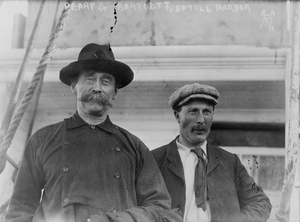 Hawthorne Cottage is a National Historic Site of Canada located in Brigus, Newfoundland and Labrador, Canada. It is operated by the Historic Sites Association of Newfoundland and Labrador. It was the residence of Captain Bob Bartlett, a famed Arctic explorer. Bartlett is credited by marine historian Thomas Appleton with "the finest feat of leadership in Canadian Marine history" in his efforts to save the crew of the ill–fated Karluk under Arctic explorer Vilhjalmur Stefansson.

Built in 1830 by Brigus merchant John Leamon, Hawthorne Cottage came into the Bartlett family through Bartlett's mother, Mary Leamon Bartlett, granddaughter of John Leamon. In 1834 the house was moved 10 kilometers from its original site in Cochranedale to its current location in the centre of Brigus. In the house are the Benville Tearooms, once operated by Bartlett's mother and sisters.

All content from Kiddle encyclopedia articles (including the article images and facts) can be freely used under Attribution-ShareAlike license, unless stated otherwise. Cite this article:
Hawthorne Cottage Facts for Kids. Kiddle Encyclopedia.