He loves me... he loves me not facts for kids 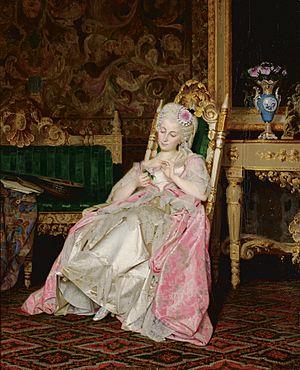 He loves me, he loves me not or She loves me, she loves me not (originally effeuiller la marguerite in French) is a game of French origin, in which one person seeks to determine whether the object of their affection returns that affection.

A person playing the game alternately speaks the phrases "He (or she) loves me," and "He loves me not," while picking one petal off a flower (usually an ox-eye daisy) for each phrase. The phrase they speak on picking off the last petal supposedly represents the truth between the object of their affection loving them or not. The player typically is motivated by attraction to the person they are speaking of while reciting the phrases. They may seek to reaffirm a pre-existing belief, or act out of whimsy.

In the original French version of the game, the petals do not simply indicate whether the object of the player's affection loves them, but to what extent: un peu or "a little", beaucoup or "a lot", passionnément or "passionately", à la folie or "to madness", or pas du tout or "not at all."

A humorous twist on the game is "She loves me, she loves me lots."

This fortune-telling is shown as a pantomime in the 1st act of Giselle, ballet by Jean Coralli and Jules Perrot (Paris, 1841). 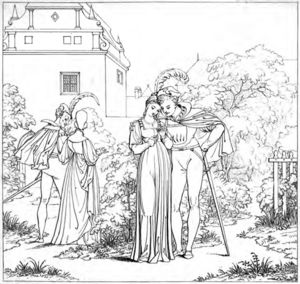 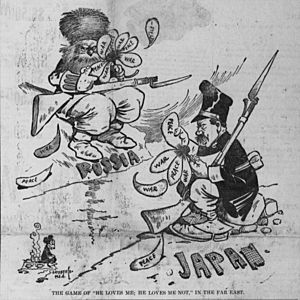 This 1904 cartoon by Bob Satterfield depicts the Russian Empire and the Empire of Japan using the game to decide whether to go to war with each other.

All content from Kiddle encyclopedia articles (including the article images and facts) can be freely used under Attribution-ShareAlike license, unless stated otherwise. Cite this article:
He loves me... he loves me not Facts for Kids. Kiddle Encyclopedia.