Kids Encyclopedia Facts
For those of a similar name, see Westkerke (disambiguation). 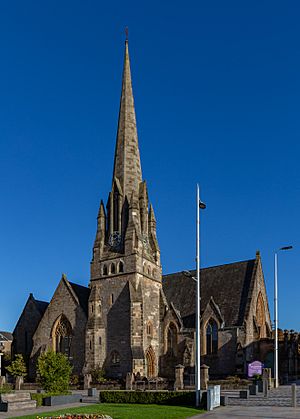 The West Kirk (since 2015 called Helensburgh Parish Church) is a Church of Scotland parish church on Colquhoun Square in Helensburgh, Argyll, Scotland. Designed by James Hay, in 1853, it is designated as a Category B listed building by Historic Environment Scotland.

All content from Kiddle encyclopedia articles (including the article images and facts) can be freely used under Attribution-ShareAlike license, unless stated otherwise. Cite this article:
Helensburgh Parish Church Facts for Kids. Kiddle Encyclopedia.