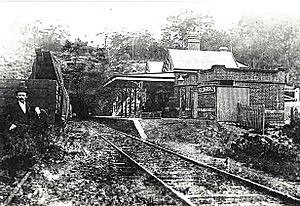 Helensburgh's first station opened in 1889 as the single line from Sutherland was progressively extended south towards Stanwell Park. It was built between the short Helensburgh Tunnel and the longer Metropolitan Tunnel to service the local Helensburgh township. A new site opened on 30 May 1915 when the line was duplicated and new tunnels were constructed between Waterfall and Otford. The first Helensburgh Station was built in 1889 on the first single line section of the Illawarra Railway, opening from Waterfall to Scarborough in 1888. This section of the line thereby provided a continuous line as far as Bombo by connecting up with the previously isolated section of line.

Early train operations from Clifton (Scarborough) to Waterfall required 8 tunnels penetrating ridges with high embankments between. Two of these tunnels, the Otford railway tunnel and the Metropolitan tunnel, were notorious for hot and suffocating conditions experienced by the crew of steam trains climbing to Waterfall from Thirroul. There were cases of enginemen burnt by the heat. Due to these conditions, the single line section became an operational bottleneck. To negotiate the steep terrain, train loads were reduced by up to 50% of capacity.

In order to provide a duplicated railway as far as Wollongong it was necessary to plan an entirely new section of the line that started at South Waterfall and ended at Lilyvale. Work commenced in 1914 to eliminate the original single line route south of Waterfall with its steep grades and poorly ventilated tunnels. Deviations requiring massive earthworks were built for a less severely graded double track, and this project was known as the "Helensburgh Deviation". Completion of the project was accomplished in 1920 when the worst of the tunnels (the Otford tunnel) was bypassed.

Helensburgh Railway Station has an island platform with a standard brick single storey building being one of the longest of its type, the signal box section now being used as a waiting room. To the east is a brick and steel overbridge that originally connected the platform by way of a steel and pre-cast concrete footbridge and stairs.

Helensburgh became the temporary terminus of the electrified line when it opened from Waterfall on 6 May 1984. Electrification was extended through to Port Kembla in January 1986.

In 2007, at the western end of the platform, a reinforced concrete footbridge was built over the "down" line with stairs and lifts connecting between the platform and the car park on the southern side of the station. The staircase to the Wilsons Creek Road overpass was removed at this time.

Helensburgh has one island platform with two faces and is serviced by NSW TrainLink South Coast line services travelling between Sydney Central, Bondi Junction and Kiama. It is also the terminating point for one weekday afternoon Sydney Trains service that is extended from Waterfall primarily to convey school students.

Premier Charters operates one route to and from Helensburgh station:

The station complex includes the platform building, platform and Park Street overbridge, all completed in 1915, and the footbridge, completed in 2007.

There is a single painted brick island platform building, curved to follow the curve of the platform, with a gabled corrugated steel roof and skillion corrugated steel awning roofs on both sides. The building has two painted brick chimneys with pairs of unglazed terracotta chimney pots. There are rectangular timber vents to the gable ends of the building. The building features original timber framed double hung windows with 9-paned top sashes with coloured glass panes. The bottom sashes are 2-paned, one of the panes being coloured glass. Awnings on both sides of the platform building are cantilevered on steel brackets mounted on decorative sandstone brackets. There are timber valances to both ends of each awning.

A modern footbridge with stairs and lifts which provides platform access from the southern side of the line only.

A curved island platform with brick edges, with evidence of extension of the platform and of the previous signal application. Asphalt surface.

Helensburgh Railway Station is located in a bushland setting at the bottom of a valley, within a railway cutting.

The platform building, platform and Park Street overbridge were all reported to be in good condition as at 25 June 2009.

Helensburgh railway station was listed on the New South Wales State Heritage Register on 2 April 1999 having satisfied the following criteria.

All content from Kiddle encyclopedia articles (including the article images and facts) can be freely used under Attribution-ShareAlike license, unless stated otherwise. Cite this article:
Helensburgh railway station Facts for Kids. Kiddle Encyclopedia.