A number of species in this family are valued as food items, including Cornu aspersum (formerly Helix aspersa) the brown or garden snail, and Helix pomatia the "escargot". The biologies of these two species in particular have been thoroughly studied and documented.

The shells of these snails are mostly rather globular in shape. In some genera, such as Cepaea, the shells are brightly colored and patterned.

The animal is capable of complete retraction within the shell. The tail is without a mucous gland or projection.

The mouth is always provided with a jaw, which is striate, ribbed, sulcate or plicate, sometimes composed of several imbricating pieces. The radula is composed of many transverse horizontal series of teeth, the centrals tricuspidate, about the size of the laterals, laterals bicuspid, or tricuspid with the interior cusp obsolete, marginals usually wider than high, short with two or three small cusps.

In the soft parts the most obvious distinction is the lack of a caudal mucous pit, and their possessing a sculptured jaw. Typically, there is a distinction in the dentition, although in some species the lateral teeth take on a pseudozonitoid appearance; even in such cases the extreme marginals in Helix remain short and very obtuse.

This family of snails is defined by the anatomical presence of a diverticulum. Some genera within this family create and use love darts as part of their mating behavior. These snails have one dart apparatus. The dart sac has no accessory sac, and contains two tubular glands, inserted at the base of the dart sac.

In this family, the number of haploid chromosomes lies between 21 and 30 (according to the values in this table). 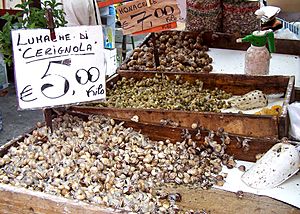 Helicid snails for sale as food in Italy; from the front Eobania vermiculata, Cantareus apertus, and Helix sp.

The family is native to Eurasia and belongs the Western Palearctic group.

However some species, notably Cornu aspersum, have been introduced and become established in numerous different areas worldwide.

Many accidental introductions happen because the eggs of most Helicidae are laid in the soil, and they may thus easily travel unnoticed along with landscaping plants. 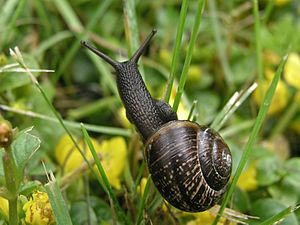 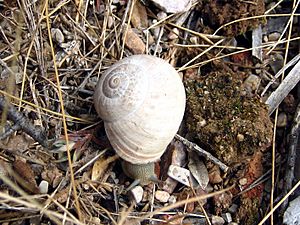 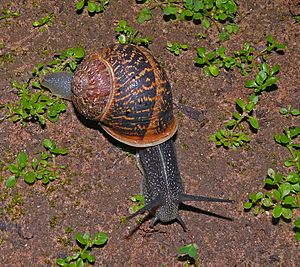 The family Helicidae contains 3 subfamilies (according to molecular phylogenetic analyses):

In this subfamily the glands are divided. The love dart has four blades or vanes. There are usually two penial papillae.

In this subfamily the glands are divided or undivided. The love darts contain two to four blades. There is only one penial papilla.

All content from Kiddle encyclopedia articles (including the article images and facts) can be freely used under Attribution-ShareAlike license, unless stated otherwise. Cite this article:
Helicidae Facts for Kids. Kiddle Encyclopedia.