The Henry B. Clarke House is a Greek Revival style house in Chicago, Illinois, United States. Henry Brown Clarke was a native of New York State who had come to Chicago in 1833 with his wife, Caroline Palmer Clarke, and his family. He entered into the hardware business with William Jones and Byram King, establishing King, Jones and Company, and provided building materials to the growing Chicago populace. The house was built in circa 1836 by a local contractor, probably John Rye, who later married the Clarkes' housemaid, Betsy.

Originally built near Michigan Avenue and 17th Street, it has been moved twice, most recently in 1977 to Indiana Avenue and 18th Street, near its original location. Its current location in a park and gardens is part of the Prairie Avenue Historic District in the Near South Side community area and the house is now a museum.

Clarke House may have been modeled on the home of William B. Ogden. The Clarke house is often described as the oldest surviving house in Chicago, although part of the Noble-Seymour-Crippen House in the Norwood Park neighborhood was built in 1833. (However, Norwood Park was not annexed to Chicago until 1893.) The Clarke House was designated a Chicago Landmark on October 14, 1970. It was added to the National Register of Historic Places on May 6, 1971.

Originally built on 20.08 acres (8.13 ha) of land near Michigan Avenue between 16th and 17th Streets, it is currently located at 1827 S. Indiana, near its original location. Clarke's decision to build south of the River made him the first wealthy Chicagoan to build there. Clarke suffered severe financial setbacks during the Panic of 1837 and used the surrounding land for farming and hunting. This setback resulted in a delay in the completion of the south rooms of his house.

Clarke died in 1849 after being stricken with cholera. Caroline Palmer Clarke lived until 1860 and it was during this time that the house was known as the "Widow Clarke's House". After her husband's death, Caroline Clarke established "Clarke's addition to Chicago" by selling all but 3 acres (12,000 m2) of the original land that went with the house. She used this money to support her family and renovate her house, adding an elaborate back portico with Doric columns, much like the original portico facing the lake. The new porch faced the newly gaslit Michigan Avenue. At the same time, she added an Italianate cupola and decorated her dining room and front parlor, which remained unfinished from the time of the family's financial setbacks.

In 1871 John Chrimes, a prominent Chicago tailor, purchased the house and moved it farther south to 45th Street and Wabash Avenue into what was then the township of Hyde Park. When the house was being moved, a packet of papers was discovered that Clarke had apparently buried when building the house. The packet contained a memorial to President Martin van Buren recommending Henry Clarke for a job, tax receipts, newspapers of the day, and a statement in Henry Clarke's handwriting, stating, "I, Henry B. Clarke, am an ardent Democrat." While on the new site, the building housed the St. Paul Church of God in Christ for more than thirty years. As the parsonage and community hall of this church, the Clarke House was the working home of Bishop Louis Henry Ford, the man for whom the Bishop Ford Freeway would later be named.

In 1977, the City of Chicago purchased the house and moved it to its current location, a project that included lifting the entire building over the L tracks on the Englewood-Jackson Park line. It was a cold December night and the hydraulic equipment responsible for supporting the house froze. For two weeks, the house sat adjacent to the El tracks until it could be moved to its current home at 1827 S. Indiana. 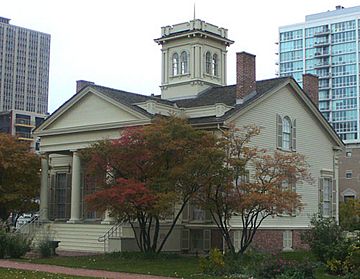 The Clarke House as it appears today.

All content from Kiddle encyclopedia articles (including the article images and facts) can be freely used under Attribution-ShareAlike license, unless stated otherwise. Cite this article:
Henry B. Clarke House Facts for Kids. Kiddle Encyclopedia.