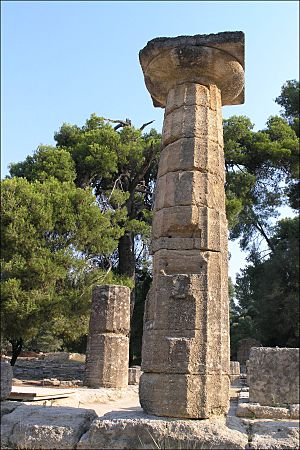 The Heraia were footraces held in honor of the goddess Hera in Olympia, Greece since early ancient times. The races were said to have been created by Hippodameia in gratitude for her marriage to Pelops.

Only virgins from Elis, Greece competed. They wore a short tunic that fell just above the knees. The right shoulder was bare to the breast. Competitors ran only about 160 meters in the stadium of Olympia. This was somewhat short of the stadium's complete length.

The judges were 16 Eleian women. Every four years, they wove Hera's sacred peplos (dress), and took it to her Temple. The judges had two special dances: the Hippodameia and the Physkoa. The latter was dedicated to a local nymph with whom Dionysos fell in love.

Winners of the race received an olive branch wreath and a portion of the cow's meat sacrificed to Hera. They had the right to dedicate their statues to the Temple of Hera. The Heraia was not held during the years of the men's Olympic Games. About two years separated the events.

All content from Kiddle encyclopedia articles (including the article images and facts) can be freely used under Attribution-ShareAlike license, unless stated otherwise. Cite this article:
Heraia Facts for Kids. Kiddle Encyclopedia.