see Hermann Muller (disambig) for others with similar names 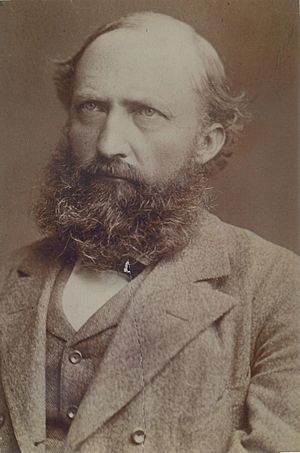 Müller was an early investigator of coevolution.p27 He was the author in 1873 of Die Befruchtung der Blumen durch Insekten, a book translated at the suggestion of Darwin in 1883 as The fertilisation of flowers. He and Darwin corresponded—36 letters between the two, or from Darwin concerning Müller, are recorded. Darwin cited him extensively in The Descent of Man for his information about the behavior of bees.

Hermann was the brother of Fritz Müller,p29 the German doctor who lived in the Amazon and researched its natural history. The work of both brothers was well known to Darwin.

This author is usually abbreviated H.Müll. when citing a botanical name.

All content from Kiddle encyclopedia articles (including the article images and facts) can be freely used under Attribution-ShareAlike license, unless stated otherwise. Cite this article:
Hermann Müller Facts for Kids. Kiddle Encyclopedia.