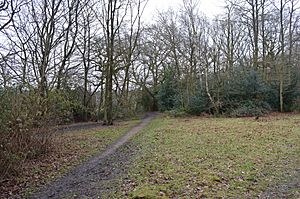 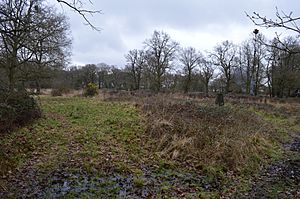 Heathland is a threatened habitat in southern England, and this site is a good example of lowland heath on pebble gravels, with open areas which have freely draining acidic soils. The heath is dominated by heather, and there are grass snakes and slow worms. Sphagnum mosses and creeping willow are found in wetter areas. Secondary woodland on acid London clay is mainly oak and hornbeam, with an understorey of holly. Ponds support the rare water violet and a rich invertebrate fauna such as great crested and smooth newts, the water spider and eight species of dragonfly. Birds include the great-spotted woodpecker and nuthatch.

The reserve is in two parts on either side of London Road. The southern part is accessed from The Roundings, next to the College Arms public house. It adjoins Balls Wood, which is also managed by the Herts and Middlesex Wildlife Trust. The northern area is off Heath Lane, opposite the pub.

All content from Kiddle encyclopedia articles (including the article images and facts) can be freely used under Attribution-ShareAlike license, unless stated otherwise. Cite this article:
Hertford Heath nature reserve Facts for Kids. Kiddle Encyclopedia.