Highland Heights–Stevens' Subdivision Historic District is a residential historic district located in Highland Park, Michigan along five east-west streets: Farrand Park, McLean Street, Colorado Street, Rhode Island Street, and Massachusetts Street, between Woodward Avenue on the west and Oakland Avenue on the east. The district was listed on the National Register of Historic Places in 1988.

The structures in the neighborhood are primarily single-family homes built in the early twentieth-century. The area features an unusually high concentration of high quality, middle class housing stock, built over a short period of time, with much of it still well-preserved. 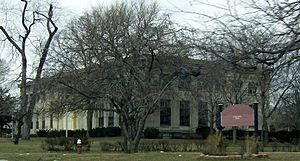 The houses are fine representation of the variety of American residential architecture in the years 1900-1930. Styles represented include foursquares, bungalows, and various revival styles. There are also 393 garages in the district, located along back alleys. Of these, 373 appear to have been constructed in the years of the area's initial development, and their presence and construction reflects the upwardly mobile, middle-class character of the neighborhood.

All content from Kiddle encyclopedia articles (including the article images and facts) can be freely used under Attribution-ShareAlike license, unless stated otherwise. Cite this article:
Highland Heights–Stevens' Subdivision Historic District Facts for Kids. Kiddle Encyclopedia.