His Lordship's Kindness facts for kids

His Lordship's Kindness, also known as Poplar Hill, is a historic plantation estate on Woodyard Road east of Clinton, Maryland. It was built in the 1780s for Prince George's County planter Robert Darnall. The five-part Georgian mansion retains a number of subsidiary buildings including a slave's hospital and a dovecote. The property is now operated as a museum by a local nonprofit preservation group. It was designated a National Historic Landmark in 1970. 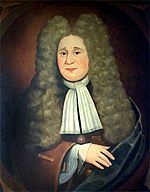 Colonel Henry Darnall was granted 7,000 acres (28 km2) of land in Prince George's County, Maryland in 1703 by Charles Calvert, 3rd Baron Baltimore, which Darnall named in recognition of Lord Baltimore's gesture. Darnall built a house for his family on a nearby property, known as The Woodyard, between 1683 and 1711.

On Henry Darnall's death in 1711, the properties passed to his son, Henry Darnall II, who was forced to dispose of much of his father's accumulated 35,000 acres (140 km2) of property to clear his debts before leaving the country. His son, Henry Darnall III received the remaining 1,300 acres (5.3 km2) from his father, including 300 acres (1.2 km2) of the original grant with a mansion, which became known as Poplar Hill by the 1740s. Henry III, however, was found in 1761 to be embezzling money from one of his appointed positions, causing a bond to be forfeited and for fines to be paid by Henry's guarantors, his brother John Darnall, and Charles Carroll of Annapolis.

Through the next hundred years, the property passed through a number of hands, including David K.E. Bruce, Chandler Hale, and the Catholic Archdiocese of Washington.

His Lordship's Kindness is a five-part ensemble with a hipped-roof central block measuring 56 feet (17 m) wide by 48 feet (15 m) deep. The central block is 2½ stories tall, with dormers in the rear elevation. It is connected to two -1/2 story end pavilions by single-story hyphens. The eastern pavilion contained the kitchen, while a chapel was located in the west pavilion. The kitchen was renovated as a study in the 1920s but retained an interior balcony. The main block features a projecting bay containing the recessed entry door with fanlight, pilasters and pediment, and a large Palladian window on the second story. The facade's other windows have stone sills and flat arch lintels. The rear, or garden elevation is similarly composed, but lacks the projecting bay, and the door is less elaborately detailed.

The John M. and Sara R. Walton Foundation own and operate the property as a historic house museum. Guided tours of the historic house are offered from March through December. The facilities are available for rental.

All content from Kiddle encyclopedia articles (including the article images and facts) can be freely used under Attribution-ShareAlike license, unless stated otherwise. Cite this article:
His Lordship's Kindness Facts for Kids. Kiddle Encyclopedia.