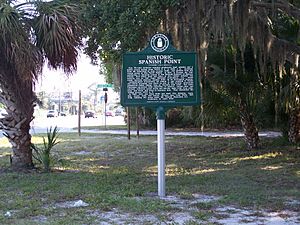 Historic Spanish Point is a 30-acre (120,000 m2) museum and environmental complex located in Osprey, Florida. It is operated by the Gulf Coast Heritage Association, Inc. Located at 337 North Tamiami Trail, in Osprey, Florida, the museum includes an archeological exhibit of a prehistoric shell mound known as a midden, a turn-of-the-century pioneer homestead historic house museum, a citrus packing house, a chapel, boatyard, gardens and nature trails.

An archaeological record exists on the site from approximately 5,000 years of Florida prehistory. Habitation of the site spans the Late Archaic period (5,900–3,200 years ago) through to the Manasota and Late Woodland periods (3,200–1,000 years ago.) Prehistoric people living on Tampa Bay's shoreline began using ceramics and transitioned from nomadic hunters and gatherers to settled subsistence societies. They capitalized on the abundant resources provided by the Gulf of Mexico, marsh, woodland and bay ecosystems; and utilized growing specialized tool technology to further establish the permanent and seasonal settlements. These people disappear from the archaeological record of the site sometime prior to AD 1100. To date no evidence of European contact has been found, indicating that the site was probably abandoned until the John Greene Webb family arrived in 1867.

Webb and his family moved from Utica, New York to establish a homestead on the shores of Little Sarasota Bay. A Spanish trader the family met in Key West told them of an elevated point of land on the bay. The Webbs named their homestead Spanish Point to honor the good advice of the trader. John Webb and his family planted citrus, sugar cane, and vegetables; and built a packing house to prepare their goods for market. In the early 1900s the Webb family sold parcels of the homestead to new settlers.

In 1910 a wealthy Chicago socialite named Bertha Palmer, widow of Potter Palmer, purchased the Spanish Point homestead, as well as thousands of acres for cattle ranching, citrus groves, and real estate development. The Webb homestead was part of the land she chose for her 350-acre estate which she named "Osprey Point." She preserved the pioneer buildings and connected them with lavish formal gardens and lawns. Mrs. Palmer died of breast cancer at age 68 in May 1918. Her family maintained Osprey Point and in 1959, her grandson Gordon Palmer sponsored the three-year excavation of the archaeological site by Ripley P. Bullen. The site is now home to the museum at Historic Spanish Point.

Led by art historian Baila Miller, this lecture series features on the life and works of artists like Louis Comfort Tiffany, Dale Chihuly, Vincent van Gogh, and many others as well as operas such as Barber of Seville and Madame Butterfly. Each session costs $25 for non-members, $20 for members.

Pups at the Point

Geared towards pet owners, this series of programs features tours and events that are pet friendly, including Pups and Plants which leads pets and their owners on a tour on the grounds and teaches them about what plants are pet-safe. One aspect of this program is the Read with the Dogs program that is done in connection with the Osprey Public Library and Suncoast Humane Society and it provides pet therapy to children.

A creative and educational program that includes on-site activities, "hearing-assistive wireless broadcast tours, and large-print tour brochures, all designed to serve an older population that may be experiencing age-related limitations."

This camp is for children and features several different options based on the activities offered and age group such as Junior Explores Nature and Archaeology Adventures Camp that teaches children about archaeology and prehistoric times or Survivor Adventure Camp which teaches children basic outdoor skills and wilderness survival skills. 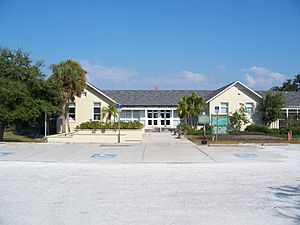 This building was one of five schools built between 1926 and 1928 along the Tamiami Trail in Sarasota County to serve a growing population due to the 1920s real-estate boom. Designed by Tampa architect M. Leo Elliott in the Spanish Colonial Revival style, the building is listed in the National Register of Historic Places. Today, it serves as the Historic Spanish Point Visitors' Center and houses and orientation programme, administrative offices and a museum store.

The Entrance Cottage is located at the entrance to the historic site.

The Gazebo is similar to one that was part of Mrs. Palmers' Osprey Point estate, 1910–1918. Although not fully restored, it features many native ferns, trees and epiphytes (air plants).

The Water Garden, or Ornamental Pond, was created by Mrs. Potter Palmer as part of her Osprey Point estate.

The Burial Mound was built by many generations of prehistoric native North Americans who lived along the Shell Ridge Midden from about 300 to 1000. Human bones and ceremonial offerings of shark teeth, smashed pottery and other materials were periodically placed on the mound, then covered with sand.

Citrus fruit was washed, cured, sorted and crated in the Packing House for shipment to Key West, Florida or Cedar Key, Florida, where it then was shipped to northern markets. The building is an authentic reconstruction of the original.

When not out cruising the bay, Magic, a replica of what was originally a sailboat that was retrofitted as a motor launch by John Webb around 1900 is moored near the Packing House pier. John Webb's grandson, Charles Webb, used Magic to transport and entertain guests at Webb's Winter Resort. It has been told for years by the docents at Spanish Point that the demise of the Magic was not known. Recently it was discovered that Charles Webb had left a hand written Journal and in that hand written Journal he told of the demise of the Magic. A hurricane hit the Osprey area in 1921. Before the hurricane arrived Charles Webb dragged the Magic as far up on land as he could. Further than he had ever seen the water line rise to previously. However, the Hurricane was a fierce storm and worse than was expected. After the storm had died down Charles Webb went to check on the Magic and found that it had been totally destroyed by the sea.

Mary's Chapel is named for Mary Sherrill, a young woman who died while staying at Webbs' Winter Resort, operated by the Webb family. The 1986 reconstruction contains the six stained-glass windows that were salvaged from the original building by Mabel Webb Johnson Sims. The chapel is a popular place for small country weddings.

Next to Mary's Chapel is the family graveyard where members of the Webb family and other area pioneers are interred.

Now a grassy field with a few lychee trees, the field was once a large grove of lychee trees, a fruit-producing evergreen imported from the Far East. The Lychee Field was part of Gordon Palmer's nursery in the 1950s.

The entrance to Mrs. Palmer's Fern Walk is under the aqueduct. In a natural hollow created by the archaic midden, beautiful ferns and palms are featured.

Frank and Lizzie Webb Guptill built their home on the prehistoric Archaic Midden in 1901. They rented rooms to winter boarders. Ten years later, the home was acquired by Mrs. Potter Palmer and called Hill Cottage. The Guptill House is furnished to depict the Florida pioneer era.

For early settlers along Florida's coast, local estuaries and the Gulf of Mexico were central to life. The Webb family homestead was dependent on aquatic resources, boats and maritime commerce. Frank Guptill operated his boatyard on the shores of Little Sarasota Bay very near to the place where this working boatyard is built.

Known as Palmer site 8s02, this is the oldest midden at Historic Spanish Point, dating to before 3000 BC. The site is thought to have been built by the Calusa Indian tribe. The Archaic Midden is made up of layers of shellfish, shell tools, pottery and other early artifacts built up through the Late Archaic (5,900-3,200 years ago), Manasota, and Late Woodland (3,200–1,000 years ago) periods. It is the only archaeological exhibit in the United States that is built inside an archaic midden. The occupation would have been by the Calusa people, a band of complex hunter-gatherers who inhabited the Southwest Coast of Florida.

The Jungle Walk was created by Mrs. Potter Palmer with shell paths meandering past classical urns and tropical vegetation. A miniature aqueduct features water flowing over a shell cascade. To the north was once the Blue Garden and Mrs. Palmer's house, The Oaks.

The original Footbridge was constructed in the late 1890s by Daniel Cock, whose boarding house, "Fiddler's Lodge", once stood at its northern end. Today, it provides and excellent view of the mangrove shoreline and the mooring of Lizzie G. and other wooden boats.

This sharpie sailboat is an operational replica of an 1890s boat and was designed by master boatbuilder Stan Lowe & built under his direction by volunteers at Historic Spanish Point using traditional tools, techniques, and materials. The wood was harvested from local trees, cut down and shaped by hand. No power tools were used in the construction of the Lizzie G. The sails are hand stitched cotton.

Also known as "Bertha's Cottage", the house was constructed in 1931 for Potter Palmer III and his wife, Rose. It was later occupied by Potter's sister, Bertha, and her husband, Oakleigh Thorne. Today, it serves as a center for educational programs.

A Window to the Past

This archaeological exhibition is located inside a prehistoric shell midden. It features an audiovisual program about Historic Spanish Point's first inhabitants, a diorama that depicts a prehistoric dwelling, exhibits, and interactive displays.

The highest point on the Shell Ridge Midden was created by the early inhabitants, perhaps to serve as a platform for the chief's residence or temple. It is also the site where the Webbs built their home, in 1867.

The Sunken Garden was created by Mrs. Potter Palmer between 1912 and 1915 as a formal garden area within the native Florida environment. The adjacent Pergola was constructed to provide views of the bay. Today, it is a popular wedding venue.

Originally built by Jack Webb in 1884, this building became "The Dormitory" in the 1890s for the Webbs' Winter Resort. The first floor features exhibit galleries. The second floor houses a research center that is open by appointment only.

All content from Kiddle encyclopedia articles (including the article images and facts) can be freely used under Attribution-ShareAlike license, unless stated otherwise. Cite this article:
Historic Spanish Point Facts for Kids. Kiddle Encyclopedia.