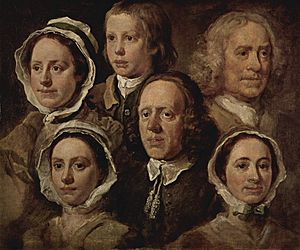 The painting shows three men and three women, of different ages. Each person looks in a different direction. The three women all look young, not children but also not old. The men are different ages, from a boy (at the top center), to an adult man (at the bottom center), to an elderly man (at the top right). Ronald Paulson thinks the servants could be a coachman (coach driver), valet (helper), messenger, housekeeper (top housemaid), and two housemaids. The servants are shown in their normal look, in their normal clothes. The painting was painted with love and sensitivity, showing Hogarth's affection for his servants.

All content from Kiddle encyclopedia articles (including the article images and facts) can be freely used under Attribution-ShareAlike license, unless stated otherwise. Cite this article:
Hogarth's Servants Facts for Kids. Kiddle Encyclopedia.