Hollywood Gaming at Dayton Raceway is a racino in Dayton, Ohio, United States. It was originally established in 1959 as Raceway Park in Toledo, Ohio, hosting car racing and thoroughbred racing. It is owned by Gaming and Leisure Properties and operated by Penn National Gaming.

Standardbreds are featured in Harness Racing at Raceway Park in Toledo, Ohio 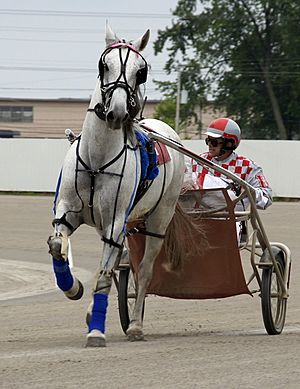 A Pacer warms up before racing at Raceway Park in Toledo, Ohio

In 2011, Governor John Kasich agreed to allow video lottery terminals at Ohio's seven racetracks. To avoid having Raceway Park compete with its own Hollywood Casino Toledo, Penn National has sought and obtained state approval to move Raceway Park to Dayton. The racetrack move was completed in the Spring of 2014. The racino opened on August 28, 2014 with 1,000 video lottery terminals.

All content from Kiddle encyclopedia articles (including the article images and facts) can be freely used under Attribution-ShareAlike license, unless stated otherwise. Cite this article:
Hollywood Gaming at Dayton Raceway Facts for Kids. Kiddle Encyclopedia.