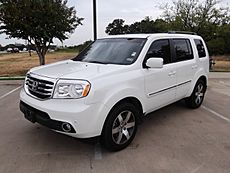 Honda Pilot is a mid-sized four-door crossover utility vehicle. It was first made in 2002 as a 2003 model. The vehicle replaced Honda's compact SUV the Passport, which was actually a re-badged Isuzu Rodeo. The Pilot is built on the Accord platform, which also underpins the Odyssey minivan and the Ridgeline pickup truck.

The vehicle was redesigned in 2009. It has three rows of seats. The vehicle has limited off-road capability but does allow wading through nineteen inches of water. The Pilot was Honda's largest crossover up until the introduction of the Crosstour, a station wagon based SUV built on the Accord platform. While it is longer than the Pilot it doesn't allow seating for 7-8 passengers.

The Pilot has been compared with other crossover cars and sport utility vehicles.

The Pilot was redesigned in 2015 for the 2016 model year. It no longer has a boxy crossover look. It now looks more like the Honda Odyssey. Its 6-cylinder engine is now more powerful and mated to 6- and 9-speed automatic transmissions.

All content from Kiddle encyclopedia articles (including the article images and facts) can be freely used under Attribution-ShareAlike license, unless stated otherwise. Cite this article:
Honda Pilot Facts for Kids. Kiddle Encyclopedia.