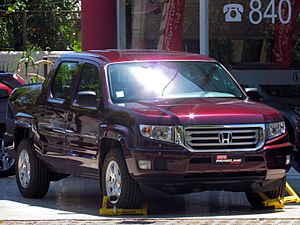 Honda Ridgeline is a mid sized pickup truck produced by Honda. The first model year for this truck was 2006; it has undergone several changes in design since being introduced. Unlike a traditional body-on-frame truck, the Ridgeline uses a closed box unibody frame similar to the one used on the Accord, Pilot and Odyssey. Despite good sales Honda pulled the truck in 2015. A second generation model was introduced in 2017.

All content from Kiddle encyclopedia articles (including the article images and facts) can be freely used under Attribution-ShareAlike license, unless stated otherwise. Cite this article:
Honda Ridgeline Facts for Kids. Kiddle Encyclopedia.