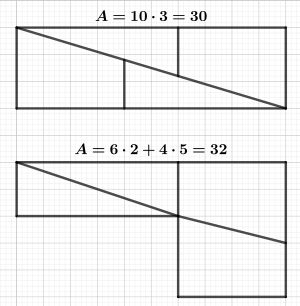 Hooper's paradox is a falsidical paradox based on a optical illusion. A geometric shape with an area of 32 units is dissected into four parts, which afterwards get assembled into a rectangle with an area of only 30 units.

Explanation of Hooper's paradox. The brown parallelogram is the overlapping area of the two triangles.

The area of this parallelogram can determined using Heron's formula for triangles. This yields

So the overlapping area of the two triangles accounts exactly for the vanished area of 2 units.

All content from Kiddle encyclopedia articles (including the article images and facts) can be freely used under Attribution-ShareAlike license, unless stated otherwise. Cite this article:
Hooper's paradox Facts for Kids. Kiddle Encyclopedia.