Hove War Memorial is a First World War memorial on Grand Avenue in Hove, East Sussex, on the south-east coast of England. The memorial was designed by Sir Edwin Lutyens with sculpture by Sir George Frampton and closely resembles Fordham War Memorial in Cambridgeshire, which was also a collaboration between Lutyens and Frampton. It was unveiled in 1921 and is today a grade II listed building.

In the aftermath of the First World War and its unprecedented casualties, thousands of war memorials were built across Britain. Amongst the most prominent designers of memorials was the architect Sir Edwin Lutyens, described by Historic England as "the leading English architect of his generation". Lutyens designed the Cenotaph on Whitehall in London, which became the focus for the national Remembrance Sunday commemorations, as well as the Thiepval Memorial to the Missing—the largest British war memorial anywhere in the world—and the Stone of Remembrance which appears in all large Commonwealth War Graves Commission cemeteries and in several of Lutyens's civic war memorials. Hove's memorial is unusual among Lutyens' works in that it features a bronze statue of Saint George, a feature shared only with Fordham War Memorial in Cambridgeshire.

The proposal for a war memorial in Hove was first noted in the vestry notes section of the local newspaper, and the project apparently progressed smoothly. As in many places, a war memorial committee was formed in Hove to handle the town's commemorations. The committee appointed Lutyens as the architect and he made several proposals for the design of Hove's war memorial, including an obelisk or a cenotaph and erected a wooden model of the latter on Hove Lawns on the seafront, but these were rejected in favour of the statue of St George. The committee's preferred site, in Palmeira Gardens, was rejected by the landowner, leaving the committee with three sites on Grand Avenue. Lutyens chose a site in the middle of the road, towards the southern end of Grand Avenue, in June 1920. 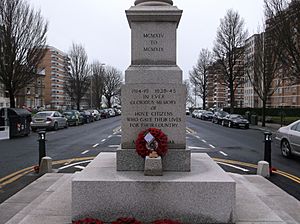 The lower sections of the memorial, showing the inscriptions, partially obscured by a poppy wreath laid at a remembrance service.

The memorial consists of a bronze statue of Saint George holding a sword by the blade below the hilt, sculpted by Sir George Frampton, which stands on a grey granite Doric column. At the bottom of the column is a two-staged square plinth and below that is base of three square stone blocks. The whole memorial stands on three shallow stone steps, taking the memorial to a total height of 10 metres (33 feet). At the corners of the bottom step are low stone bollards, which are part of the original design, next to which are metal lamp pillars, which are a modern addition. The memorial does not include a space for the names of the fallen; these are instead recorded on a bronze plaque which was placed in Hove Library.

The plinth contains the memorial's inscriptions (inscriptions relating to the Second World War were added at a later date). The main inscription is on the north face: "IN EVER GLORIOUS MEMORY OF HOVE CITIZENS WHO GAVE THEIR LIVES FOR THEIR COUNTRY IN THE GREAT WAR AND WORLD WAR". The south face reads "THEIR NAME LIVETH FOR EVERMORE", while the dates of the First and Second World Wars are inscribed in Roman numerals on each face higher on the plinth: "MCMXIV TO MCMXIX" (1914–1919) on the north and south faces and "MCMXXXIX TO MCMXLV" (1939–1945) on the east and west.

The total cost of the memorial was £1,537 (1920). The memorial was unveiled on 27 February 1921 by Charles Wyndham, 3rd Baron Leconfield, the Lord Lieutenant of Sussex. Lutyens was away in India but sent his office manager, AJ Thomas, in his place.

Lutyens adapted the design for a proposal for a war memorial in Shere in Surrey, but the memorial committee there opted for a different architect and design. Hove War Memorial was designated a grade II listed building on 2 November 1992. In March 2015, as part of commemorations for the centenary of the First World War, Lutyens' war memorials were recognised as a "national collection" and all of his free-standing memorials in England were listed or had their listing status reviewed and their National Heritage List for England list entries were updated and expanded.

All content from Kiddle encyclopedia articles (including the article images and facts) can be freely used under Attribution-ShareAlike license, unless stated otherwise. Cite this article:
Hove War Memorial Facts for Kids. Kiddle Encyclopedia.