The Hull-Wolcott House is an historic building in Maumee, Ohio.

Named for James Wolcott, a businessman in the late 1820s to the mid 1840s, only the Wolcott House is original to the site. Built by James Wolcott and his wife, Mary Wells, the Wolcott House began as a log house and evolved into a 14-room Federal-style mansion between 1827 and 1836. The house is a blend of federal and classic architecture.

In 1826, James Wolcott and his Mary moved to Maumee. They purchased 300 acres for $1.25 an acre in 1827 and began construction of their home. Wolcott built wharves and warehouses on the Maumee River and constructed two steamships to transport his merchandise. .

James and Mary Wolcott had five sons and a daughter. The house passed through three generations to Wolcott's great-granddaughter, Rilla Hull, who was the last of the Wolcott line to reside in the "Mansion on the Maumee". Upon her death in 1957, Hull bequeathed her home for public use and benefit. St. Paul's Episcopal Church transferred the landmark to the City of Maumee for use as a historical museum.

Today the Hull–Wolcott House is part of the Wolcott House Museum Complex, which is run by the Maumee Valley Historical Society. The complex consists of the following structures: 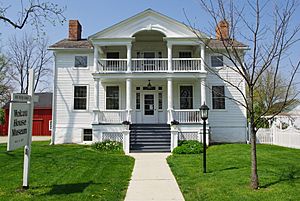 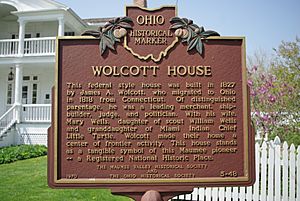 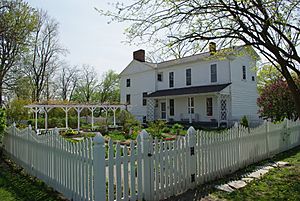 Looking across the garden at the Hull–Wolcott House 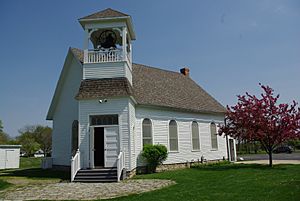 All content from Kiddle encyclopedia articles (including the article images and facts) can be freely used under Attribution-ShareAlike license, unless stated otherwise. Cite this article:
Hull–Wolcott House Facts for Kids. Kiddle Encyclopedia.