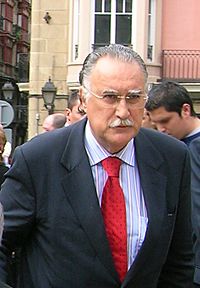 Iñaki Azkuna Urreta (14 February 1943 – 20 March 2014) was a Spanish politician of the Basque Nationalist Party. From 1999 until his death, he was mayor of the city of Bilbao, Biscay in the Basque Country. In 2012, he won the World Mayor Prize, honoring the most outstanding mayors in the world. He was born in Durango, Biscay.

All content from Kiddle encyclopedia articles (including the article images and facts) can be freely used under Attribution-ShareAlike license, unless stated otherwise. Cite this article:
Iñaki Azkuna Facts for Kids. Kiddle Encyclopedia.