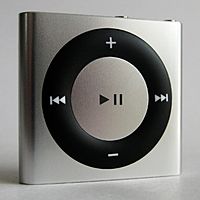 The iPod shuffle is an MP3 player made by Apple Inc. It is available with a 4GB memory which can hold roughly 1,000 songs, or 2GB memory holding roughly 500 songs. The iPod shuffle is Apple's smallest music player, it is 45.2mm tall, 17.5mm wide, and has a depth of 7.8mm.

The four generations of the iPod Shuffle

First generation iPod Shuffle with the cap removed to show the USB connector. The cap snaps onto the unit. iPod Shuffle comes with a second cap on a lanyard, which a user can wear around his or her neck 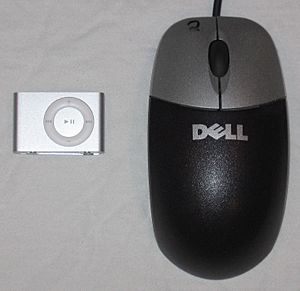 The inside of a third generation iPod Shuffle

The iPod shuffle's battery plays audio for 15 hours when fully charged. It can be charged to 80% of its capacity in 2 hours, and fully charged in 3 hours.

The iPod shuffle is the first music player that talks to you, using a feature called VoiceOver. When the button on the headphones is held down, VoiceOver will speak the song currently playing and its artist. If you continue holding it, it will tell you your playlists. Click the centre button to select a playlist. This feature is available in 20 languages.

The iPod shuffle is available in pink, blue, green, orange, black and silver. A polished stainless steel edition is available from the online store.

The first iPod Shuffle was released on January 11, 2005. Steve Jobs said that people were always putting their iPods on shuffle mode and taking them to the gym and using them while they were jogging and that the iPod Shuffle lets you do that in a much more simpler way. The iPod Shuffle relies on a feature from iTunes that lets you select random songs from the iTunes library and copy them onto the Shuffle. It doesn't have a screen and doesn't have most features the other iPods have and instead of having the click wheel, the iPod Shuffle has a more basic wheel with the up and down buttons being for volume, the left and right buttons being for switching between songs and the middle button for playing and pausing. The back has a clip and a light that tells you when the iPod has a low battery.

The second generation iPod Shuffle was released on September 12, 2006. It's size was changed to be even smaller being the size of a square ans Steve Jobs said it was the smallest MP3 player ever.

On September 9, 2009 three new colors pink, blue and green were released and the Apple Store offered a 4GB iPod Shuffle made entirely out of stainless steel.

All content from Kiddle encyclopedia articles (including the article images and facts) can be freely used under Attribution-ShareAlike license, unless stated otherwise. Cite this article:
IPod shuffle Facts for Kids. Kiddle Encyclopedia.