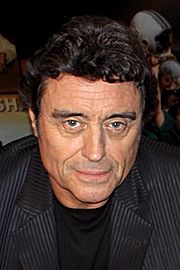 Ian David McShane (born September 29, 1942) is an English movie, television, stage, voice actor, movie director, movie producer, and comedian. He is known his roles as Tai Lung in Kung Fu Panda and as Blackbeard in Pirates of the Caribbean: On Stranger Tides. He has won a TCA Award and a Golden Globe Award.

All content from Kiddle encyclopedia articles (including the article images and facts) can be freely used under Attribution-ShareAlike license, unless stated otherwise. Cite this article:
Ian McShane Facts for Kids. Kiddle Encyclopedia.