Immigration detention in the United States facts for kids 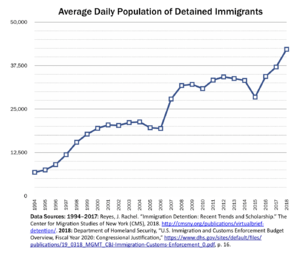 Average daily population of detained immigrants held by the United States government for the fiscal years 1994–2018.

The United States government holds tens of thousands of immigrants in detention. The Customs and Border Protection (CBP; principally the Border Patrol) and the Immigration and Customs Enforcement (ICE) do this. Immigrants are detained for entering into the United States illegally, when their requests for asylum are received (and before they are released into the United States by parole), and in the process of deportation and removal from the country. During Fiscal Year 2018, 396,448 people were in ICE custody: 242,778 of them were detained by CBP and 153,670 by ICE. A daily average of 42,188 immigrants (40,075 adult and 2,113 in families) were held by ICE in that year. More than twelve thousand immigrant children are in buildings that the Office of Refugee Resettlement's program for Unaccompanied Alien Children controls. Before they are moved to these other agencies, the CBP keeps immigrants at processing centers; between mid-May and mid-June 2019, it kept between 14,000 and 18,000 immigrants.

All content from Kiddle encyclopedia articles (including the article images and facts) can be freely used under Attribution-ShareAlike license, unless stated otherwise. Cite this article:
Immigration detention in the United States Facts for Kids. Kiddle Encyclopedia.