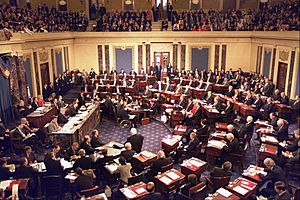 The impeachment trial of President Bill Clinton in 1999, Chief Justice William H. Rehnquist presiding. The House managers are seated beside the quarter-circular tables on the left and the president's personal counsel on the right, much in the fashion of President Andrew Johnson's trial

Impeachment is a way to remove government officials from office in some countries. It happens when the official does not want to leave his or her job. It is like an indictment (something that the prosecutor needs to get before the trial). Someone is impeached when a legislature votes to do that. Later, there is another vote on whether or not to convict, which is like guilty. The second vote may be by the same people who did the impeachment, or someone else as in a bicameral legislature.

All content from Kiddle encyclopedia articles (including the article images and facts) can be freely used under Attribution-ShareAlike license, unless stated otherwise. Cite this article:
Impeachment Facts for Kids. Kiddle Encyclopedia.