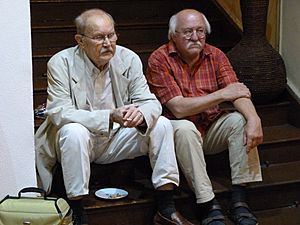 Makovecz was born and died in Budapest. He attended the Technical University of Budapest. He was founder and "eternal and executive president" of the Hungarian Academy of Arts. He was an award-winning architect, having won Ybl Prize, Kossuth Prize, Steindl Imre Prize and Prima Primissima Award among many others.

Makovecz was one of the most prominent proponents of organic architecture. As such, his buildings attempt to work with the natural surroundings rather than triumph over them. Frank Lloyd Wright and Rudolf Steiner are both strong influences, as is traditional Hungarian art.

His work began as a critique of communist ideology and the brutal uniformity of system building, but after the fall of the Communist regime in 1989, it became a comment on the nature of globalisation and corporate culture. In its attempts to refer to and build on Hungarian national archetypes, Makovecz was continuing the work and ideas of the architects of Hungarian Art Nouveau and National Romanticism. The first English language monograph on his work, Imre Makovecz: T.e Wings of the Soul, by Edwin Heathcote, was published in 1997. More recently, his work has been examined in the broader context of Hungarian culture to which also belongs organic cinema.

Makovecz was a devout Roman Catholic. 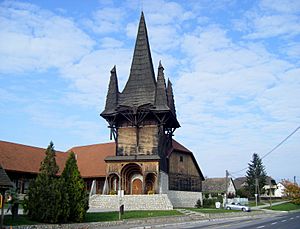 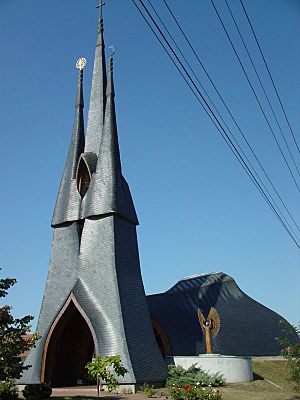 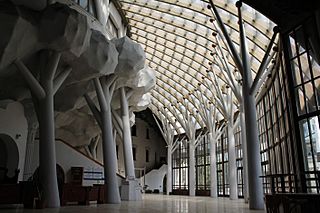 All content from Kiddle encyclopedia articles (including the article images and facts) can be freely used under Attribution-ShareAlike license, unless stated otherwise. Cite this article:
Imre Makovecz Facts for Kids. Kiddle Encyclopedia.