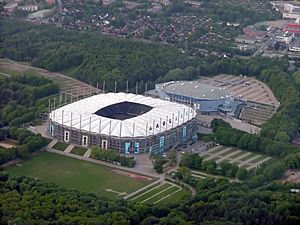 The Imtech Arena is a concert and sports arena in Hamburg, Germany. It is owned and used by the Hamburger SV football team. Many Hamburg residents still refer to the arena as the Volksparkstadion (Peoples Park Stadium), though AOL bought the naming rights for 30 million marks or 15.3 million euros in 2001. From July 2007 until July 2010 the name was HSH Nordbank Arena.

The stadium houses a museum which presents the history of the Hamburger SV club.

All content from Kiddle encyclopedia articles (including the article images and facts) can be freely used under Attribution-ShareAlike license, unless stated otherwise. Cite this article:
Imtech Arena Facts for Kids. Kiddle Encyclopedia.