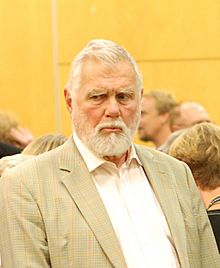 Hertur Roland Ingemar Odlander (29 February 1936 – 19 July 2014) was a Swedish journalist. He worked for SVT news on its news programmes Aktuellt and Rapport. Between 1975 and 1978, Odlander was the first ever Swedish foreign news reported stationed in Nairobi, Kenya. From 1978 and until his death in 2014, Odlander was married to Christina Jutterström.

All content from Kiddle encyclopedia articles (including the article images and facts) can be freely used under Attribution-ShareAlike license, unless stated otherwise. Cite this article:
Ingemar Odlander Facts for Kids. Kiddle Encyclopedia.