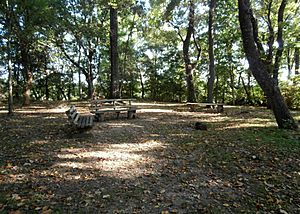 Ingomar Mound is the large central mound and sole remaining feature of a ceremonial center of the late Mississippian Period of cultural development. A total of 13 mounds composing the group have been excavated. Believed to be a temple mound, Ingomar is the only structure of the group not overrun by later agriculture and development, thus generally undisturbed when archeologists began studying the complex of mounds. At least one of the mounds in the group was a flat-topped burial mound. Ingomar is one of the largest such mounds found in the Southeast. Ingomar is important because of its potential for the testing of theories about aboriginal settlement pattern hypotheses, such as the Clay's system environments theory and Steponaitis' spatial efficiency theory

All content from Kiddle encyclopedia articles (including the article images and facts) can be freely used under Attribution-ShareAlike license, unless stated otherwise. Cite this article:
Ingomar Mound Facts for Kids. Kiddle Encyclopedia.