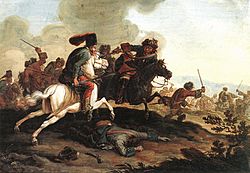 An insurgency is an armed rebellion by any irregular armed force that rises up against an established authority, government, administration or occupation. Those carrying out an insurgency are “insurgents”. Insurgents conduct sabotage and harassment. Insurgents usually are in opposition to a civil authority or government primarily in the hope of improving their condition.

The term is inherently political and is difficult to use without taking a political position. When used by an authority under threat, “insurgency” implies an illegitimacy of cause upon those rising up. Whereas those rising up will see the authority itself as being illegitimate. In cases of rebellions, the term insurgents refers to those who are not part of the decision-making entity that has the ability to make laws.

Insurgencies differ in their use of tactics and methods. In a 2004 article, Robert R. Tomes spoke of four elements that "typically encompass an insurgency":

All content from Kiddle encyclopedia articles (including the article images and facts) can be freely used under Attribution-ShareAlike license, unless stated otherwise. Cite this article:
Insurgent Facts for Kids. Kiddle Encyclopedia.