The International Bomber Command Centre (IBCC) is a memorial and interpretation centre telling the story of Bomber Command during the Second World War.

Overlooking the city of Lincoln, in England, the centre opened to the public at the end of January 2018. The official opening ceremony was held on 12 April 2018, as part of the 100th anniversary celebrations of the RAF.

The project is owned and run by the Lincolnshire Bomber Command Memorial (a registered charity), with the digital archive being created in partnership with the University of Lincoln.

The project was created to act as a point of "recognition, remembrance and reconciliation for Bomber Command".

IBCC aims to tell the personal stories of service men and women of RAF Bomber Command, ground crews and civilians affected by the bombing campaigns on both sides of the conflict during the Second World War. The centre provides a comprehensive record of the role of Bomber Command's squadrons and digitally displays historical documents and photographs relating to the activity of Bomber Command.

The IBCC has created a digital archive on Bomber Command integrating oral histories, photographs, diaries, letters and service records. Much of the archive has never been available for public access before. Around 1,200 oral history interviews with veterans and survivors of the bombing have been recorded and 200,000 items have been preserved by the archive's staff and volunteers.

The IBCC has a comprehensive record of Bomber Command Losses. It holds the records of all losses from 1936 - 1968 and includes details of the individual, their crew, details of how they were lost and, where available, photographs, epitaphs and AIR records. This amounts to almost 4 million pieces of individual data all available to use for free via the website.

The Heritage Lottery Fund contributed £3.1 million of funding towards the £16 million cost of building the centre, £2.1 million through the Chancellor's Libor funds. Other funds have been donated by private individuals and other grant funding bodies. 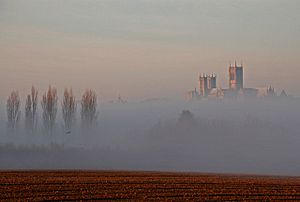 A view of Lincoln Cathedral from near Canwick Hill 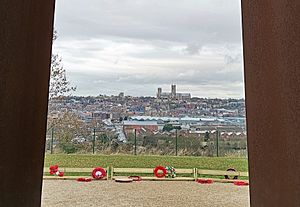 View from base of spire

Located at Canwick Hill, the centre is just under two and half miles from RAF Waddington, which suffered the greatest losses of any Bomber Command station, and close to the former Avro aircraft production facility at Bracebridge Heath.

A view of Lincoln Cathedral, a prominent landmark for aircrews, forms an important part of the vista from the centre of the Memorial Spire.

The visitor centre is named after Roy Chadwick, the designer of the Lancaster bomber

The Chadwick Centre includes an education suite, an interactive and immersive exhibition across three galleries, visitor facilities and a collections room. The centre relates the experiences of service personnel in Bomber Command and the effects of bombing on civilian populations. The centre also covers both the war time and post-war review of the bombing campaigns undertaken during the Second World War.

The centre has already collected over 1,200 personal experiences of Bomber Command veterans from around the world, as well as from civilians affected by the bombing campaigns and civilians recording the consequences for Lincolnshire of having so many RAF personnel arrive. 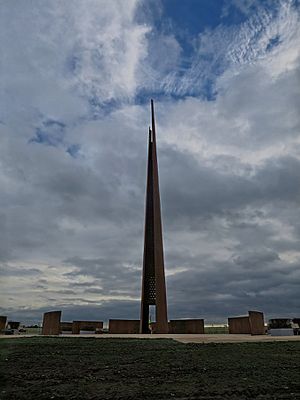 Within the grounds of the International Bomber Command Centre the Spire Memorial was erected on 10 May 2015. The memorial is a spire, reflecting the connection to Lincoln Cathedral. Created out of Corten A weathering steel, it is based on the dimensions of the wingspan of a Lancaster bomber, being 102 ft (31.09 m) high and 16 ft (5 m) at the base. The spire was officially unveiled in October 2015 to an audience of 3,600 guests, including 312 RAF veterans.

The spire is encircled by walls carrying the names of all 57,871 men and women who gave their lives whilst serving in or supporting Bomber Command. This is the only place in the world where all these losses are memorialised. 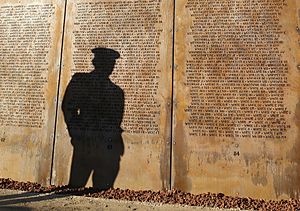 Plates bear the names of aircrew who lost their lives flying from bases in Lincolnshire.

These include a Memorial Avenue as part of the Lincolnshire Peace Garden, with geo-located trees for each of the 27 Lincolnshire stations, an International Garden with planting beds representing the five continents and 62 nations involved with Bomber Command, an amphitheatre for outdoor education and areas of sensory planting. The Peace Gardens incorporate a Ribbon of Remembrance, made of laser cut Scoutmoor yorkstone, that enables families, associations and nations to mark those who served.

All content from Kiddle encyclopedia articles (including the article images and facts) can be freely used under Attribution-ShareAlike license, unless stated otherwise. Cite this article:
International Bomber Command Centre Facts for Kids. Kiddle Encyclopedia.