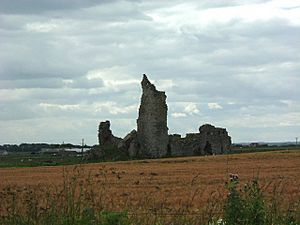 Inverallochy Castle is a ruined courtyard castle near the village of Inverallochy in the Buchan area of north-east Scotland. It lies 0.5 miles (0.80 km) south of Cairnbulg Castle near Fraserburgh. It was described by W. Douglas Simpson as one of the nine castles of the Knuckle, referring to the rocky headland of north-east Aberdeenshire.

The remains of buildings are arranged around three sides of a courtyard, with a curtain wall across the south side. A tower in the north-east corner remains largely to its full height, while the remaining curtain wall stands up to 10m high. The internal walls have largely collapsed. Evidence of a larger outer courtyard measuring approximately 60 metres (200 ft) square to the north and east remains. The ruins are protected as a scheduled monument. The castle appears to have all been built at one time, and architectural evidence suggests an early 16th-century date. It may have been the work of Sir William Comyn of Inverallochy, who was Lord Lyon in 1512–1519.

Until the latter half of the 18th century there was a stone inserted above the entrance, bearing the sculptured arms of the Comyns, with an inscription "recording that the estate around it was obtained by Jordan Comyn for building the abbey of Deer".

All content from Kiddle encyclopedia articles (including the article images and facts) can be freely used under Attribution-ShareAlike license, unless stated otherwise. Cite this article:
Inverallochy Castle Facts for Kids. Kiddle Encyclopedia.