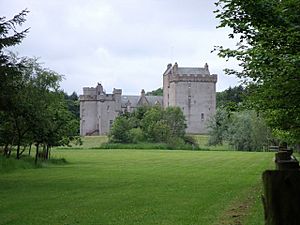 Cairnbulg Castle is a z-plan castle situated in Cairnbulg, Aberdeenshire, Scotland. It was described by W. Douglas Simpson as one of the nine castles of the Knuckle, referring to the rocky headland of north-east Aberdeenshire. It stands by the River Philorth and was originally known as Philorth Castle.

The castle was built in the early 14th century but destroyed in the winter of 1308–1309 in the Wars of Independence. Subsequently granted to the Earls of Ross, it was re-built in 1380 after the daughter of the 5th Earl married Sir Alexander Fraser of Cowie. In the 16th century a second, round, tower, a courtyard and outbuildings were added to the original square main tower.

In 1613 the Frasers of Philorth sold the castle which, after passing through several other families of the Fraser clan, ended up in 1775 with George Gordon, 3rd Earl of Aberdeen, who removed anything of value. In the late Victorian period the castle, by now almost a ruin, was purchased and restored by the wealthy Duthie family of Aberdeen. In 1934 it returned to the Fraser family after being bought by Lord Saltoun, a direct descendant of the 8th Laird. Flora Fraser, 21st Lady Saltoun and her husband Captain Alexander Ramsay of Mar, who was one of Queen Victoria's great grandchildren, lived there for a while. Their daughter, Katharine Fraser, Mistress of Saltoun, took possession of the castle in 1997.

During the Second World War the castle was used as the Officers' Mess for nearby RAF Fraserburgh.

Cairnbulg Castle is open to the public only by appointment.

All content from Kiddle encyclopedia articles (including the article images and facts) can be freely used under Attribution-ShareAlike license, unless stated otherwise. Cite this article:
Cairnbulg Castle Facts for Kids. Kiddle Encyclopedia.