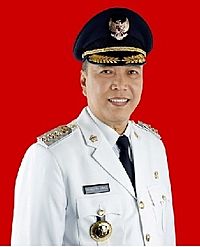 Irdinansyah Tarmizi (13 March 1957 – 19 September 2020) was an Indonesian politician. He was born in Bukittinggi, Indonesia. He was a member of the Golkar Party. Between 2014 to 2015, he was Deputy Regent of the Tanah Datar Regency. In 2016, he became the official Regent of Tanah Datar.

Tarmizi died of colon cancer on 19 September 2020 at a hospital in Padang, Indonesia at the age of 63.

All content from Kiddle encyclopedia articles (including the article images and facts) can be freely used under Attribution-ShareAlike license, unless stated otherwise. Cite this article:
Irdinansyah Tarmizi Facts for Kids. Kiddle Encyclopedia.