Iris giganticaerulea, the giant blue iris, is a species of iris, it is also in the subgenus Limniris and in the series Hexagonae. It is a rhizomatous perennial, from northern America. It has long bright green leaves, very tall stems, 1–2 musky fragrant flowers, in a range of blue shades, from pale blue, to lavender blue, to bright blue, to dark blue, and to violet blue. Rarely, there is a white form.

Iris giganticaerulea (like its common name the 'Giant blue iris') is the largest species of the Louisiana Irises.

It blooms between during early to mid spring, generally between March and April (both in the UK and America), with fragrant flowers which have a musky scent.

It comes in a range of blue shades, from pale blue, to lavender blue, to bright blue, to dark blue, and to violet blue. Occasionally there is a white form, or yellowish white.

After flowering, it has bright green ellipsoid capsules 3–4 inches (7–10 cm) long by 1 inch (3 cm) wide, which are hexagonal in cross section and shaped like a D.

It has the common name of Giant blue iris, or Giant blue flag. Note, the blue flag is normally Iris virginica.

It was first published and described by Small (of the New York Botanical Garden,) in 'Addisonia' in 1929.

In 1937, Foster thought that it was a variety of Iris hexagona and renamed it 'Iris hexagona var. giganticaerulea'. In 1966, Randolph re-assessed it and classified it as a separate species.

It was verified by United States Department of Agriculture and the Agricultural Research Service on 4 April 2003, and then updated on 2 December 2004.

It is native to northern America.

Iris giganticaerulea is native to Alabama, Louisiana, (on the west edge of Mississippi River), eastern Texas, and Mississippi in the United States.

This constricted range is due to limited hardiness of the species.

It grows in shallow freshwater, within roadside ditches, clearings within swamps (including cypress swamps,), wet meadows and marshes. It is tolerant of brackish water. 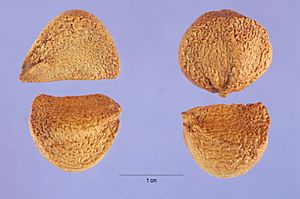 The Louisiana irises generally all have similar cultivation requirements, with minor differences. They need full sunlight or partial shade, moist, acidic soils (ph level of 6.5) with a high organic and high fertility content (or humus rich).

For best flowering, moisture is essential during late autumn, winter and spring times (between October to May), when the plant starts to grow new leaves. They can be given a light feed between autumn and spring, if needed.

Propagation is best carried out by division of the rhizomes. Which is best carried out in early autumn or early spring, when the plants are dormant. The ground must be prepared pre-planting, with the addition of a generous amount of organic matter and the soils dug to about 6 inches deep (to allow for new root growth). Plants require dividing every 3–4 years to promote good flowering. They can combine with other plants but tend to 'move' to suitable positions.

If using a fertilizer, sprinkle around the plant in late January or February, before the plant is in flower.

New plantings need to be mulched to prevent sun-scalding. It is also recommended to be added to during winter.

The iris seed is not hard to raise but a very slow process. It can take many months to germinate (between 3–12 months) with a 50% germination average. They then can take 3–5 years before reaching flowering stage.

Seeds should be harvested from the plant after flowering but they must be from mature seed pods. They then should be stored in paper bags, as seed stored in glass containers often goes mouldy.

Iris giganticaerulea and Iris hexagona are considered too tender for cultivation in the UK. Since it needs moist acid soils, with warm summers and milder winters.

It is often available at water garden centres.

Iris giganticaerulea can easily hybridize with other Louisiana irises to create new variants.

Other crosses include with Iris fulva to produce 'Iris × vinicolor' Small.

All content from Kiddle encyclopedia articles (including the article images and facts) can be freely used under Attribution-ShareAlike license, unless stated otherwise. Cite this article:
Iris giganticaerulea Facts for Kids. Kiddle Encyclopedia.