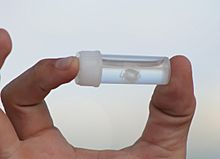 Irukandji jellyfish are any of several similar, extremely venomous species of box jellyfish. With an adult size of roughly a cubic centimetre (1 cm3), they are both one of the smallest and most venomous jellyfish in the world. They inhabit the marine waters of Australia. They are able to fire their stingers into their victim, causing symptoms collectively known as Irukandji syndrome. There are about 16 known species of Irukandji.

The Irukandji jellyfish exists in the northern waters of Australia. The southern extent of the Irukandji's range on Australia's eastern coast has been gradually moving south, and this has been attributed to climate change.

Unlike most jellyfish, which have stingers only on their tentacles, the Irukandji also has stingers on its bell. Biologists have yet to discover the purpose of this unique characteristic. The hypothesis is that the feature enables the jellyfish to be more likely to catch its prey of small fish.

Irukandji jellyfish have the ability to fire stingers from the tips of their tentacles and inject venom, the stings are so severe they can cause fatal brain haemorrhages and on average send 50-100 people to the hospital annually. It is capable of delivering a sting 100 times as potent as that of a cobra and 1,000 times stronger than a tarantula.

Irukandji syndrome is produced by a small amount of venom and induces excruciating muscle cramps in the arms and legs, severe pain in the back and kidneys, a burning sensation of the skin and face, headaches, nausea, restlessness, sweating, vomiting, an increase in heart rate and blood pressure, and psychological phenomena such as the feeling of impending doom. The syndrome is in part caused by release of catecholamines. The venom contains a sodium channel modulator.

The sting is moderately irritating; the severe syndrome is delayed for 5–120 minutes (30 minutes on average). The symptoms last from hours to weeks, and victims usually require hospitalisation. Contrary to belief, researchers from James Cook University and Cairns hospital in far north Queensland have found that vinegar promotes the discharge of jellyfish venom.

The Irukandjis' name comes from an Australian Aboriginal tribe. The tribe lived in the Palm Cove region of North Queensland. When the Irukandji people were stung by the Irukandji, there are many symptoms. This includes:

Sometimes, people may also get fluid on their lungs (pulmonary oedema), hypertension, and heart failure.

Very little is known about the life cycle and venom of Irukandji jellyfish. This is partly because they are too small and fragile requiring special handling and containment. Their venom is very powerful; they are suspected of killing 5 tourists during a 3-month period in Australia. Researchers conjecture that the venom possesses such potency to enable it to quickly stun its prey, which consists of small and fast fish.

The Irukandji is related to another jellyfish. This is the box jellyfish, Chironex Fleckeri. Irukandji was identified in 1964 by a Cairns doctor, Jack Barnes. Because of this, its scientific name is named after him. When people were getting hurt in the sea, Barnes was sure it was because of a jellyfish. He put on diving equipment and lay on the sea floor for six days until he discovered it. When Barnes discovered the Irukandji jellyfish, he tested its sting on himself, his son, and a lifeguard. They all had to be taken to the hospital.

Irukandji has stingers - not only on its tentacles, but also on its bell. It is very small and weak. Because of this, sudden force may kill it. So, it cannot be kept in a normal aquarium. The first Irukandji jellyfish in captivity was born in Townsville, Queensland.

All content from Kiddle encyclopedia articles (including the article images and facts) can be freely used under Attribution-ShareAlike license, unless stated otherwise. Cite this article:
Irukandji jellyfish Facts for Kids. Kiddle Encyclopedia.